Showing posts from October, 2017
Show All

Does the West need to be quicker on the draw? 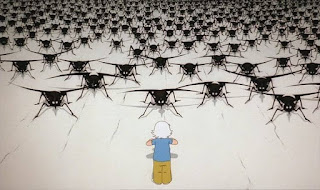 Before the magazine was no more, I did a bit of film reviewing for John Gilbert' Fear Magazine. One of the articles I wrote had a look at animation in horror films. Below, with the permission of John, is the article in full. Hopefully some new films for people to discover and old favourites to be reacquainted with. Ever since I was a kid I have loved animated films. And it’s not just me. You simply need to look at the money taken by smash hits such as the Toy Story, Shrek, Despicable Me, and Madagascar franchises as well as the likes of Frozen, Cars, A Bug’s Life, Antz, The Lego Movie and so on and on and on. Going back into the history of cinema we have a dominance of Disney in the box office from Bambi, Pinocchio and Cinderella through to the Lion King, Aladdin and The Little Mermaid alongside other animated films from Europe such as a spate of Asterix films and Hergé’s Adventures of Tintin.     Millions and millions spent to entertain us. The target audience for these film
2 comments
Read more

October 21, 2017
So I didn't win the BFS Award for Best Newcomer but, you know what, I'm not doing too bad. Now being up for the award got me reflecting on where I was a few years back. I remember one particular night in bits and pieces, a whole host of people who I barely knew chatting away in a downstairs bar near Tottenham Court Road called The Phoenix. The gathering was a British Fantasy Society Open Night at some point in 2013 and I was attending my first one with little more than one short story and some flash fiction smatterings behind me combined with a willingness to chat to most folks. This was me testing the waters, seeing if I could work out how to progress in this writing game. Now that evening was a bit of a first and last throw of the dice for me. I was in a slump, sending out short stories to different places and seeing what stuck (which was not a lot back then). During the evening I met Allen Ashley who is a regular feature at these events and a very nice person too. We g
Post a Comment
Read more
More posts