October 21, 2017
So I didn't win the BFS Award for Best Newcomer but, you know what, I'm not doing too bad. Now being up for the award got me reflecting on where I was a few years back.

I remember one particular night in bits and pieces, a whole host of people who I barely knew chatting away in a downstairs bar near Tottenham Court Road called The Phoenix. The gathering was a British Fantasy Society Open Night at some point in 2013 and I was attending my first one with little more than one short story and some flash fiction smatterings behind me combined with a willingness to chat to most folks. This was me testing the waters, seeing if I could work out how to progress in this writing game.

Now that evening was a bit of a first and last throw of the dice for me. I was in a slump, sending out short stories to different places and seeing what stuck (which was not a lot back then). During the evening I met Allen Ashley who is a regular feature at these events and a very nice person too. We got chatting about writing and open submissions and he mentioned 'Potatoes' an anthology being compiled by Theresa Derwin of Knightwatch Press. The premise was to use a potato as a plot device in your story. I'd seen the call but had not thought too much about subbing anything. That chat with Allen made the anthology stick in my head and the rest, as they say, is history. I crafted a story called The Banshee's Egg and Theresa accepted it as the opening piece to the anthology and I am extremely grateful for that.

That same night I was grabbed at one point by Tim Dry who had seen me post in the Facebook group for the evening to say I would come along. "Are you Phil?" he asked in his warm tones and then led me over to sit down with a small group of folks who were all lovely. Among them was Dean M Drinkel: freelance writer and editor. Dean, who was wearing this amazing pair of pointy, red shoes, had published Tim in some of his anthologies and I was encouraged to get Dean's details and see if he'd fancy seeing some of my writing. I dropped Dean some of my stuff via email and a few weeks later he invited me to submit a story for his latest anthology Phobophobias. I duly did so and came up with There Was An Old Man Who Swallowed a Fly.

Now why am I taking this little trip down memory lane? Well it's a bit of a reminder for me of how far I feel I have come with my writing. Three years ago, and a couple of times since, I have thought about just giving up on writing. It would certainly free up a lot of valuable time to spend with my family or do other things like sleep! But I am glad I didn't. I've made a load of great friends through the different anthologies I've been involved with since and from going along to varying conventions. And I'm now being approached to write pieces for people rather than chasing down the latest submissions myself. Plus that award nomination.

Have I a long way to go still with my writing? Of course - a million miles and more but I'm growing as a writer every day. I'm not sure what lies ahead for me but hopefully it will be fun finding out.

Thanks to all my friends who've said encouraging things along the way. You may not have realised how much those small interactions can change a person's life.

And if you want to check out some incredible writers who will all have had their own journey and are still travelling along it then here is the list of the BFS Award winners. Go seek out their writing. 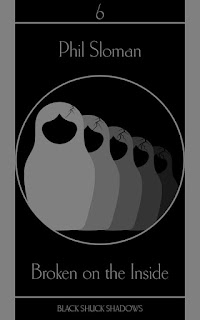